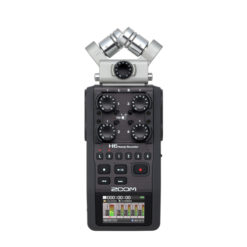 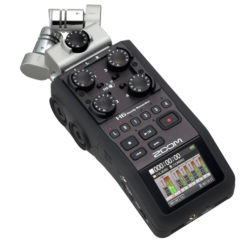 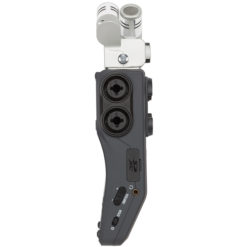 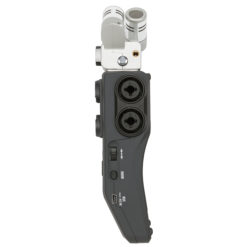 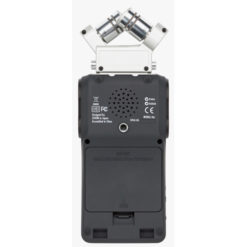 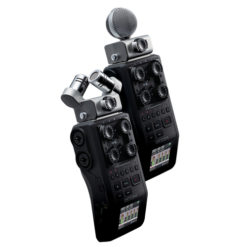 At Zoom they’ve been building innovative, great-sounding products for the past thirty years. But with the revolutionary H6—the most versatile portable recorder ever—the bar is raised further still.

Four interchangeable input capsules—X/Y, MS, Shotgun, and Dual XLR/TRS Combo—make the H6 the ultimate chameleon of the audio world, and its advanced preamps make it the best-sounding one too.

Whatever your application—live recording, professional film/video work, or broadcast ENG (electronic news gathering), etc.—the H6 can handle it with ease.

PRE-RECORD
The interview started a splitsecond before you were ready. The conductor lifted his baton just as you were checking a cable. The talent went back on-air a moment too soon.
No problem… as long as you’re using the H6. Its Pre-record function automatically keeps the H6 silently but continuously recording in the background, all the time. Then, when you hit the RECORD button, it keeps the previous two seconds and appends it to the beginning of the file. It’s as if the H6 had started recording two seconds before you actually got to hit the button.

BACKUP-RECORD
Backup-record—the ultimate safety net. When turned on during the recording of WAV files, the H6 automatically records a duplicate set of L/R tracks, but with 12dB less input gain. Even if the original L/R track is distorted, chances are the Backup version is fine.
You can listen to either set of tracks simply by going to the Backup File option in the PROJECT menu. When turned OFF, you’ll hear the original L/R tracks; when turned ON, you’ll hear the lower-level Backup tracks instead. Pick the one you prefer and use it as your L/R master. Bacon saved.

AUTO-RECORD
The Auto-record function allows the H6 to automatically start recording when a certain level of sound is detected. When turned ON and the RECORD button is pressed, the H6 doesn’t immediately start recording; instead, it goes into a standby mode; as soon as an incoming signal exceeds the Start Level you’ve set, recording begins.
There’s an equivalent Autorecord Stop function, too. When turned ON, as soon as incoming signal drops below the Stop Level you’ve set, recording ends.

Onboard effects.
The H6 provides an arsenal of effects that allows you to add polish to your recordings and compensate for any problems or limitations in the acoustics of the recording environment.

A low-cut filter allows you to remove signal below a certain user-designated frequency (called a cutoff frequency). This is useful for eliminating pops, wind noise, blowing, transmitted resonance from an onstage mic stand and other kinds of low frequency rumble.

Compression and limiting compensate for fluctuations in level; in essence, they act like an automatic volume control, reducing the level of louder sounds (that is, the sounds below a threshold point). The main difference between the two is that a limiter reduces louder sounds more severely.

The H6 allows you to choose from three compressor settings and three limiter settings. The two “General” settings (Comp1 and Limiter1) are all-purpose settings that will work well on most kinds of program material. The Comp2 and Comp3 presets are optimized for use with vocals and drums, respectively, while the Limiter2 and Limiter3 presets are optimized for use in live concert recording and small room “studio” recording, respectively.

Battery life and recording times.
The H6 requires just 4 AA batteries—either alkaline or rechargeable NiMH—for power. Battery life (when using alkaline batteries) is more than 20 hours, even during continuous recording. An optional AD-17 AC adapter (included in the APH-6 Accessory Pack) allows you to power the H6 from any standard wall socket.

The H6 records directly to SD cards. It supports standard SD cards as well as the newer SDHC and SDXC cards, up to 128 gigabytes, making it capable of accessing massive data storage.

Using the H6 as an audio interface.
The H6’s USB port allows it to send and receive digital data. Connect the H6 to your laptop or desktop computer via USB, launch your favorite DAW or use the included Cubase LE , and start laying down your tracks. You can even connect the H6 to an iPad (camera connection kit required).

When the H6 is set to “Stereo Mix” in the USB menu, it acts as a 2-input / 2-output interface; when set to “Multi Track,” it acts as a 6-input / 2-output interface. The H6’s onboard INPUT&OUTPUT mixer allows you to create a custom stereo or six-track mix for output via USB, with independent control over the level and panning of each track, as well as access to effects like low-cut filtering, compression and limiting. In addition, signal that is input to the H6 can be monitored directly before it passes through the connected computer or iPad, enabling monitoring with zero latency (that is, without any delay). There’s also a handy Loop Back mode that allows you to blend stereo signal coming from the computer or iPad with signal coming into the H6 inputs, useful for live streaming via the Internet or for adding narration to a musical backing track.

Live concert recording
The illustration shows how you might typically use the H6 for live concert recording. Here, the XYH-6 X/Y capsule is being used to capture the onstage performance in stereo. In addition, a stereo feed from the mixer is being sent to inputs 1 and 2 in order to record the board sound, and a pair of external mics is connected to inputs 3 and 4 to capture the audience sound.

Location videography
In the example shown in the illustration , the MSH-6 MS capsule is being used to capture the main sound source in stereo, with external boom and lavalier mics (connected to Inputs 1 and 2) focused on the talent providing narration. Another pair of external mics is connected to inputs 3 and 4 and are being used to record a second stereo image, this one of the other performers in the scene. By using the MS capsule, you can then use the H6’s onboard MS decoder to adjust the width of the main stereo image in post-production.

ENG
The H6 is the perfect audio companion for anyone doing ENG work, especially when it is used with the optional SGH-6 Shotgun mic capsule, as shown in this example. Here, the SGH-6 is being used to capture the news event itself, recorded on the L/R track. Because shotgun mics have a narrower focus (sometimes referred to as more “reach”) than an average microphone, the SGH-6 is the perfect choice when covering late-breaking news at a distance. In addition, the SGH-6 does a great job of picking up the frequencies produced by the human voice.

Two external handheld mics for the interviewer and interview subject are plugged into Inputs 1 and 3, with backup external lavaliers plugged into Inputs 2 and 4. The H6’s onboard effects and powerful mixing functions make it the ideal field mixer; the low-cut filter can be used to reduce wind noise, and the compressor/limiter can be used to condense the dynamic range and thus make the audio more television-friendly. The six recorded tracks can then be mixed down internally to a stereo MP3 file for microwave or satellite transmission to the broadcast facility.

Rehearsal recording
Want to record your band as they rehearse? No problem, especially if you plug in the optional EXH-6 Dual XLR/TRS capsule, which allows six discrete mic- or line-level connections to be made to your H6.

Being able to spread your instruments and vocals over six tracks instead of four gives you an extra degree of flexibility that other handy recorders cannot provide. As you listen back to your song, new musical ideas may spring to mind, and that’s where the H6’s powerful overdubbing function comes into play, because it allows any of the tracks to be redone—up to 99 different takes—meaning that you can reshape your song after the fact. 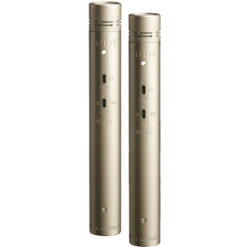 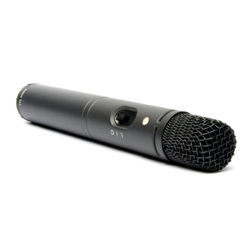 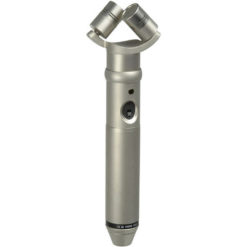 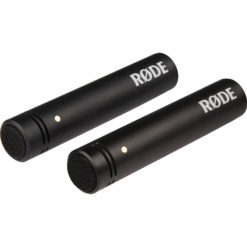 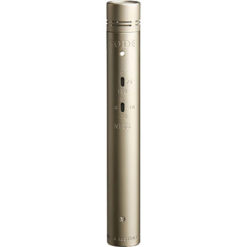 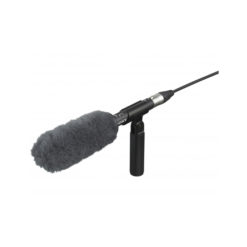 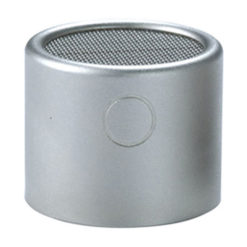 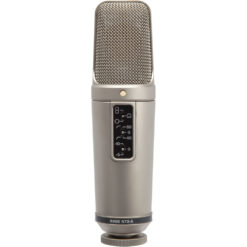